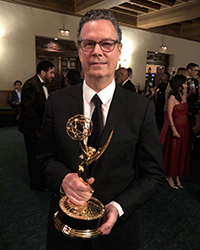 I'm honored to announce that I won the 2019 Daytime Emmy award in the category Music - Direction and Composition for The Tom and Jerry Show.

Trinom3's "Just a Bit Further" is available digitally at all retail outlets, Spotify, etc. CDs are available at CellarLive.com. Join us on our Facebook page for live videos of our CD Release party at the Blue Whale in Los Angeles in Oct 2018.

I’m scoring Randy Feldman’s indie film which he wrote and directed. A smart expose on entitlement and superiority in our society today.


Main Title for “Dawn of the Croods” Dreamworks Animation

I wrote, sang and performed the main title music for the animated series “Dawn of the Croods”, featured on Netflix and entering it’s second season.


WB's "The Tom and Jerry Show" renews for Season 2

I will be scoring all new episodes for the series, which will air in Fall 2015 on the Cartoon Network.


Trinom3's "Details are Sketchy" is available for digital download via Bandcamp

All versions of the album from Hi-res to mp3 are available at trinom3.bandcamp.com

My latest score for Nick; a caper movie in the style of 70's funk meets 60's spy movie music. Jonathan Judge directs and Scott, Michael and Co. are always a pleasure to work for.


Trinom3's CD, "Details are Sketchy" will release in May

We finally got the packaging together to get this out to everyone. The band will do a mini tour of California in June to support the release. It will also be available as a download at the usual sites.


WB has brought back "The Tom & Jerry Show"

April 9, 2014 is the premiere of The Tom & Jerry Show on Cartoon Network. I have scored half of the 56 episodes plus a double episode Christmas special with these zany characters back for more mayhem. This has been an intense and rewarding experience for me, with the style ranging from classical to old school big band jazz. Warner Bros, Renegade Animation - Darrell and Ashley, and Jim Praytor have done a spectacular job on the series, keeping it true to the original. Really fun stuff!

Started production on Trinom3, my organ trio's first CD release. We will be recording over the summer and plan a early fall release. More local gigs to happen during this time.

I have returned to one of my other passions, participating in a band, performing and writing. I have an organ trio with two fabulous musicians, Mike Clinco on guitar and Kendall Kay on drums. We are playing a mixture of funky soul jazz and European atmospheric jazz. Performances have been locally around Los Angeles and we hope this to be an ongoing project. Come visit us on Facebook, and YouTube.

Please welcome Lisa Wasiak to Team Tongerland. Lisa will be handling all music licensing situations for my catalogue.

I scored Zach & Cody's last project at Disney, The Suite Life Movie. I had a great experience working with director Sean McNamara and the team on this one.

I am part of a new documentary about rock & roll and it's role in bringing down the Berlin Wall. On camera interview and song contributions. Due out end of summer. Very interesting, check it out.

I also had the pleasure of contributing two songs to the musical theater production Red Ribbon - The Musical, which premiered in Hollywood on November 29th December 2009. Christmas Is Here Again gets a soundtrack release via iTunes, Amazon and other digital music stores.

Scored The Boy Who Cried Wolf for Nickelodeon Pictures. The film stars Brooke Shields and was directed by Eric Bross.

Wrote and produced "Fly Away Home" (Alyson Stoner vocals) for the soundtrack to Tinker Bell and The Lost Treasure.

Princess Protection Program premieres during the summer. The debut on The Disney Channel hits an all time high 8.5 million U.S. viewers.

I wrote 3 songs for "Wall-E and Eve (Music inspired by Pixar/Disney's WALL-E)". Walt Disney Records asked me to write a groovy, pop song incorporating the robot Wall-E's quirky sounds and vocalizations. Things went so well that they asked for a couple more songs. "Clean Up Time" and "Signs of Life" were both written using the environmental theme that runs through the movie as inspiration. Available now on iTunes.

Also... I spent a month working with Randy Edelman on the score to Sony's summer tentpole movie, The Mummy 3: Tomb of The Dragon Emperor.

This past year I've really spent a lot of time writing pop songs again. I've written about 15 songs in various styles, and producing the tracks has been loads of fun. The TV series, Poltergeist - The Legacy, has made a bit of a resurgence lately. It's great to see it again in syndication this year, along with The Outer Limits.